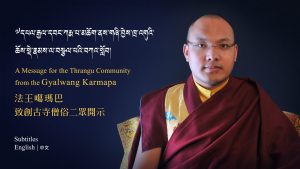 Our spiritual friend, my tutor the Lord of Refuge Thrangu Rinpoche, has spent his whole life to benefiting the teachings and sentient beings. In particular, he has had a strong influence on the Practice Lineage of the Karma Kamtsang. Even now, though he has reached an advanced age, he spends his days and nights listening, contemplating, and meditating. He also continues to turn the wheel of dharma for his students. This is a great fortune that we continue to enjoy.

Generally, a lama’s activity and life span depend on the one hand upon the lama’s own bodhichitta and aspirations. On the other hand, they also depend upon the degree of karmic obscurations or amount of merit that we sentient beings, his students, have. In the sutra tradition, the most wonderful or best way to accumulate merit is considered to be the seven-branch prayer. The seven branches include requesting all the buddhas and bodhisattvas to turn the wheel of dharma and not to pass into nirvana.

Khenchen Thrangu Rinpoche is like a regent of the Buddha. He is no different than a buddha or bodhisattva who is present in person. He is that kind of a spiritual friend, one who teaches us the path for this and future lives. Thus it is appropriate to ask him to turn the wheel of dharma and not pass into nirvana, and it is also necessary.
Everyone at the Thrangu monasteries in Tibet and abroad as well as all of us monastic and lay students has done as Rinpoche has asked of us. In terms of faith and devotion for the guru and service to him, we are special and deserve of admiration and praise. I rejoice in all of this.

The main thing I would like to say today is that in 2019, while I was in Europe, I had a dream one night that I saw Rinpoche and made a long life offering to him. While making the offering, I was reciting a long life prayer that I had written. When I woke up, I remembered the prayer reciting fairly well. I thought I might forget it, so I immediately wrote it down in my phone. Then I asked Khenpo Tengye to offer it to Rinpoche. He did so and reported that Rinpoche was delighted.

Recently, I suddenly remembered the dream and this long life prayer. I don’t usually have many dreams like that, with signs and omens. That never happens for me, so when it did occur on this one occasion, I felt that it was really rare and wonderful. I thought that reciting this long life prayer would have special benefit toward Rinpoche’s long life. Since I had such a hope or belief, I thought I should give particular encouragement to all the monastics and lay people in the Thrangu community to recite this long life prayer as much as they can.

I thought I would take this opportunity to say to all the Thrangu monasteries, dharma centers, lamas, tulkus, teachers, monks, nuns, and laypeople that you should all pray for Rinpoche to live long and to remain with us for a long time as our protector, refuge, and champion. I’d like to ask you all to make such prayers to as great an extent as you are able.

To conclude, as I have said before, when I was in India I used to go every year to Thrangu Rinpoche’s monasteries, such as the one in Varanasi. We held the conference on the Thirteen Tantras of the Marpa Tradition there, as well as the meeting when we first reformed the conduct and so forth at the Kagyu Monlam, important meetings about the Kagyu Guncho, and meetings about environmental protection. In any case, while I was in India, the place where many of my important projects were started was the Vajra Vidya Institute in Varanasi. Thus I see this temple as a special, auspicious, and important place
Also, the people I know who are students of Thrangu Rinpoche—the lamas and tulkus, khenpos, acharyas, the monks and nuns in the sangha without exception—all really have pure faith in and samaya with Rinpoche. Some of the members of sangha are still young but are still able to take on large responsibilities. Everyone does their regular jobs with pure, unpolluted intentions. In all situations, they do as Rinpoche instructs. I think it is hard to find this in any of our other Kagyu monasteries. This is a good example and worthy of praise.

For the future, Rinpoche has grown old, and on his request, I gave Chöje Lama Wangchuk his title. In the future, the main person to oversee Rinpoche’s monasteries will be Chöje Lama. Furthermore, all of our tulkus, khenpos, and teachers in the Thrangu community should all continue to keep pure intentions. Rinpoche has worked hard up through the present, so please do not let that all go to waste. Of course you are doing this, and I have confidence deep in my heart that you will continue to. So I would like to ask you all to please continue to do your best.

Through the present, you have always had unstained selfless intentions and served the guru with your body, speech, and mind. I rejoice in this and would like to express my deep gratitude. Thank you. 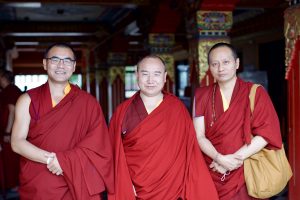 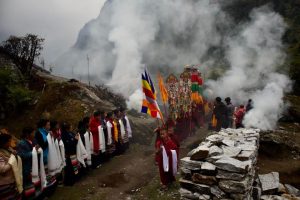 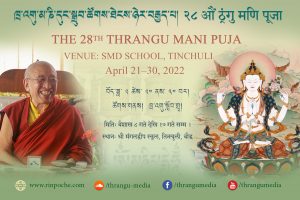 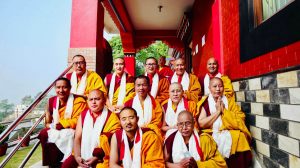 May 11, 2022 Under the guidance of our root guru the Very Venerable Khenchen Thrangu Rinpoche, Choje Lama Wangchuk Topden

Tulku Damcho and Choje Lama did the consecration and opening ceremony of the monks dormitory at our monastery in Nubri.