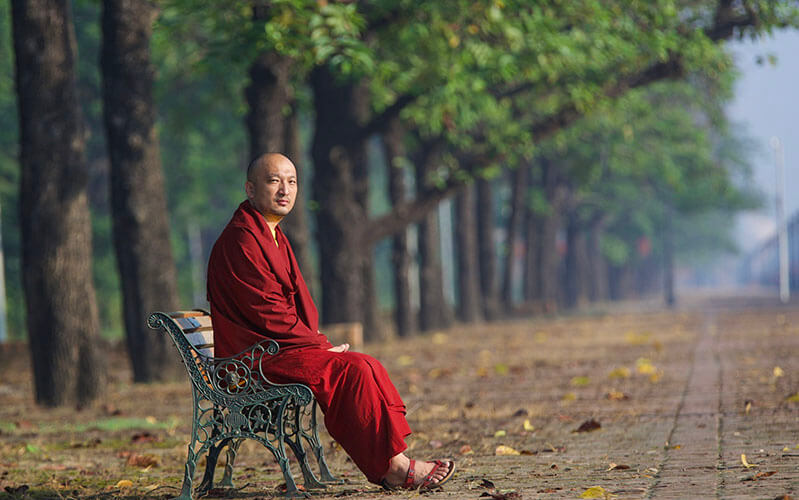 Lama Wangchuk Topden was born on 20th of November, 1983 (Lunar calendar: 15th of the 10th month) in Kathmandu; to his late father, Kunga Dhundup, and mother, Phurbu Dolma.

In 6th grade, Lama Wangchuk became a monk and studied basic Buddhist education from the Late Khenpo Ngedhon, the most senior Khenpo at Thrangu Monastery. Lama Wangchuk was the first monk to graduate from SMD school.

Thereafter, he continued his higher Buddhist Studies in the year 2000. Later on, he was appointed as The V. V. Thrangu Rinpoche’s secretary and attendant.

In 2008, he entered the traditional three year retreat at Thrangu Sekhar Retreat center under the watchful guidance of the V. V. Thrangu Rinpoche and retreat master, Drupon Rinpoche Khenpo Lhabu.

Lama Wangchuk completed his retreat in 2011 and resumed his role as the V. V. Thrangu Rinpoche’s secretary and attendant.

In 2015, he was appointed the Chairman of Namo Buddha Buddhist Meditation and Educational Center which oversees all V. V. Thrangu Rinpoche’s projects in Nepal.

During the Annual Long Life Puja (Tsedrup) at Namo Buddha, on October 31, 2018, the very Venerable Khenchen Thrangu Rinpoche appointed as his body, speech and mind representative in front of more than thousands of his Sangha members.

Since then, Choje Lama has been in charge of all the Thrangu monasteries, dharma institutes, schools, and clinic built by the Very Venerable Khenchen Thrangu Rinpoche.