Thrangu Rinpoche’s monks, nuns and schoolchildren in the various monasteries, and school need Support and sponsorship. All the projects are funded by donations.

Support and sponsorship are needed for Thrangu Rinpoche’s monks, nuns and schoolchildren in the various monasteries in Nepal, India and Tibet and for Shree Mangal Dvip Boarding School. All the projects are funded by donations.

In the monasteries and in Thrangu Tara Abbey, the nunnery, all young monks and nuns are given a secular school education in addition to an education in Buddhist Dharma up to the college for higher Buddhist philosophy.

In Shree Mangal Dvip school in Boudha, Nepal, lay children study together with monks and nuns. In the all the monasteries in other locations there are also secular studies. Thrangu Rinpoche believes that all monastics need a modern education and due to his efforts there are approximately 250 monks and nuns studying up to Grand 10. Many more have completed school. In addition they learn computer skills and become fluent in English, Tibetan and Nepali. The lay children at SMD School are from the poor Himalayan regions of Nepal. Having access to education, good nutrition, higher education, confidence building etc. they have the skills to be able to function well in the modern world, make a living, help their families and become good citizens. Due to a good education some of the monks and nuns are able to benefit the monasteries by becoming capable of good administration.

There is also support needed for the monasteries themselves to support the monastic life and the daily prayers that are conducted for the benefit of all beings.

The two colleges located in Nepal and India for Higher Buddhist studies have a 12 year program of study. Many of the graduates become Khenpos (equivalent to a Doctor of Divinity) and teachers both in the academic institutions and in centers in the east and west. The three year retreat centers allows many to practice dharma intensively in a graduated program that enables them to become more enlightened beings and also to be able to function as teachers of meditation and prayer. 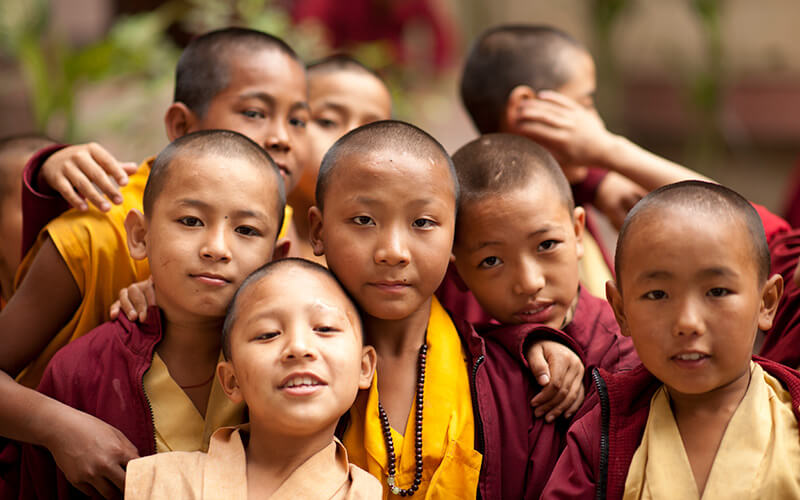 You can sponsor an individual monk, nun or school child or make general donations

Funds can be received through one of our registered non-profit charitable foundations for the support of Thrangu Rinpoche’s activities in Nepal, India and Tibet.