A Nunnery For Buddhist Nuns in Swayambhu, Nepal

Founded in 1991 by The Very Venerable Ninth Khenchen Thrangu Rinpoche.

Thrangu Tara Abbey, founded in 1991 is a monastery that was established for Buddhist nuns by The Very Venerable Khenchen Thrangu Rinpoche. It is located in Swayambunath on the outskirts of Kathmandu. The name comes from the famous Swayambu Stupa, the second largest in Nepal. There are many monasteries, temples and a large community of Tibetans and other Himalayan people in this area.

The Abbot of the Abbey is Khenpo Chonyi Rangdrol and Ven Lama Ajo is retreat master. Senior nun Ani Chomo and Ani Karma Dolma are Lama Ajo’s sisters. Their ancestors were founders and keepers of the Buddhist tradition in Manang since ancient times.

Of the approximately 230 nuns, most come from the northern areas of Nepal but there are also many from Tibet, India and Bhutan. Sometimes nuns from other parts of the world visit the Abbey. Due to the generosity of sponsors, their temple was completed and consecrated in December 2009 by H.E. Jamgon Kungtrul Rinpoche and Khenchen Thrangu Rinpoche.

In the temple are a large main shrine room, a library, a Nunye shrine room, Tara shrine room, a small suite for Thrangu Rinpoche and some housing for special guests plus the nuns’ dining room on the ground floor.

In 2004 the Thrangu Thoisam Dargyeling shedra (monastic college for Higher Buddhist Studies) was completed. The nuns study the same curriculum (five major Buddhist Text) as the monk’s shedra for 12 years. 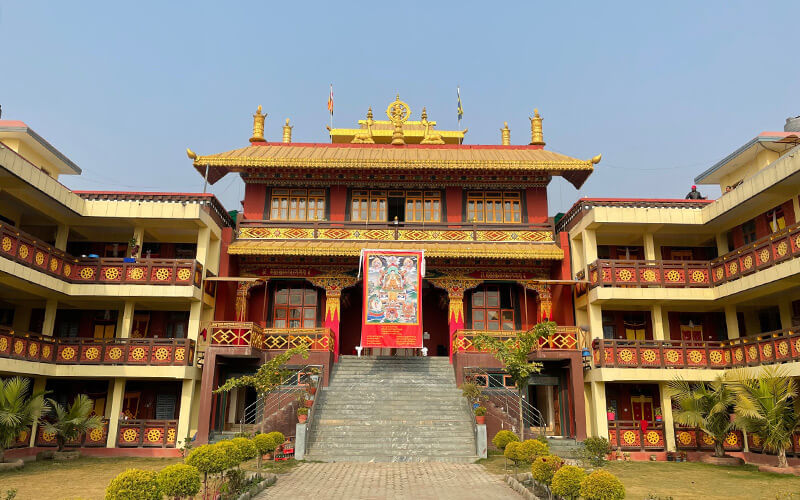 Thrangu Rinpoche had long held the intention to establish a monastic center for women in order to make available to them the full range of monastic, liturgical, philosophical and meditation training that is available to monks.

With the full range of training available to them, they will be able to teach both in the east and the west thereby helping to preserve and propagate the Buddha’s teachings. In a world where women are becoming stronger, more educated and more involved in all spheres including religion, the development of female teachers is important.

As the nuns increasingly become both scholars and yogis they will be a source of inspiration to both women and men.

Thrangu Thoisam Dargyeling Shedra (the college for higher Buddhist studies). The Tara Abbey Monastic College for Higher Buddhist Studies was inaugurated in March 2004. The shedra studies are a twelve year program. The first nuns graduated from the shedra in 2012 and became teachers .Their curriculum is the same as of that of the Vajra Vidya Insitute for monks. They study five major Buddhist texts – Abhidharma, Prajnaparamita, Madhyamaka, Pramana and Vinaya. They have daily and monthly debates and dharma discussions.

The first shedra teachers were nuns of Tara Abbey who hold MA degrees of Higher Buddhist studies from Central Tibetan Institute for Higher Buddhist Studies in Sarnath . There are four monks and seven nun teachers who are teachings shedra students in daily base. Till date forty nuns have graduated from Thrangu Thoisam Dargyeling Shedra.

Currently there are sixty five nuns studying in the Thrangu Thoisam Dargyeling Shedra and also several in Dharmsala, India and in shedras in South India.

There are many young nuns from the remote mountain regions of Nepal who have had no education because there are few schools in their villages. Approximately forty nuns attend Thrangu Rinpoche’s school for children, Shree Mangal Dvip, in Boudhanath to receive secular education.

When their schooling is finished, those who are interested study in the monastic college, become part of the nunnery administration staff or become teachers at the school or nunnery or study Tibetan Medicine.

There are classes at Tara Abbey for new nuns and some older nuns to achieve literacy in three languages (Tibetan, English and Nepali).

The nuns have a regular prayer schedule with daily prayers morning, afternoon and evening , the main daily prayers being Green Tara and Mahakala. They perform all day prayers on special days such as Gyalwa Gyamtso (Red Chenreyzig) on the 8th day of each month of the Tibetan calendar, Kunchok Chindu (Guru Rinpoche) prayers on Guru Rinpoche day which falls on the 10th of each month and eight other all day prayers which need to be recited monthly. There are special ceremony programs such Vajrasattva, Chakrasamvara and Vajrayogini prayers lasting for several days and are performed during special times of the year with preparation of sand mandala and fire puja. The Kangyur, which is the collected sutras of the Buddha, is also recited yearly from the 3rd day of the 3rd month. They also perform recitation of 100,000 times prayers to 21 tara when sponsor request. They have constant teachings, meditation practice and prayers during 45 days summer retreat that falls in July/August. Annual Mahakala grand puja is performed for nine days before they welcome lunar new year which is called Losar.

As the doctors make much of their own medicines, during the warm months they undertake field trips in the Himalayan regions to find medicinal plants.

The medical nuns make very special incense. The single ingredient is from precious trees growing in the mountains around Tsurphu Monastery, seat of the Karmapas in Tibet. The legend is that the 3rd Karmapa, Rangjung Dorje blessed the mountains with his hair and trees rose up from the hair. These trees are widely known in Tibet for purifying obstacles, expelling evil spirits and being good fortune. The incense, which is becoming quite popular, is now being sold in centers and stores in many countries.

The very first batch of three years retrat stared in 1995. Ten nuns completed the traditional three-year retreat in November 2009 at the newly built retreat center at Sher Gonpa in Manang near the famous Milarepa caves. Since then six groups with fifty nuns have completed the retreat. A new group of nine are now in retreat there.

The retreat center is close to the Tibetan border and has a wonderful view of the snow mountains. When the first nuns came to Kathmandu in 1990 to help establish the Abbey, several of them had already completed three-year retreat at that place. Since then, three retreats have been completed. The retreat schedule is the same as that of the monks in three year retreat at Sekhar Retreat Center, the retreat center for monks in Nepal. They practice six yogas of Naropa and Mahamudra.

The nuns work with Dharma Kara Publications to transcribe Thrangu Rinpoche’s teachings, given in Nepal and abroad, into Tibetan. As well, they input many texts into the computer. Nuns have inputted all the important necessary texts in to computer and have published 24 volumes of pecha text, which are very useful for three years retreat and monthly and yearly drupchens.

Thrangu ECO club is the nuns organization to preserve the environment. As well as planning trees and gardens, care is taken in the use of water and electricity. Use of plastic is restricted and old robes are made into large and small bags for carrying goods. They bring awareness program in the local community and clean swoyambhu area every year. They follow 108 guidelines of environment protection by His Holiness The 17th Gylawang Karmapa. They invite experts to give them different workshop of environment protection as well as First Aids and natural disaster relief.

In the future, as more room becomes available, there will likely be many hundreds of nuns living at the Abbey. There is a long waiting list of girls and women wishing to enter. It is hoped that Thrangu Tara Abbey will be a source and inspiration for all women who wish to lead a religious life and not only for woman from the Himalayan regions and India but also for women from other parts of Asia and from the west. Due to having a shedra for nuns with nun khenpos as teachers and their education being directed by Thrangu Rinpoche, the Abbey will become an important center for the study of Buddhist philosophy as well as ritual and prayer.