Hinang Thrangu Tashi Chopheling Monastery was built in Nubri, Nepal, by Ven. Khenchen Thrangu Rinpoche, and he consecrated the monastery in April 2009. Tulku Damcho Rinpoche formally accepted the role of spiritual head of Nubri Thrangu Monastery. Every year, the monastery offers Mani (Chenrezig) pujas, Guru Rinpoche pujas and Mahakala Pujas for the residents of the region. There is also a free medical clinic to serve the locals as well. The monastery currently has 20 monk students from ages 4 to 13. Children begin with learning the alphabet, spelling, reading, and proceed to the memorization of prayers and other relevant texts and observing daily monastic rules and regulations. They also learn various ritual arts, metrical rhymes, trumpet, making tormas, etc. As they proceed to higher classes, they learn grammar, prosody or literary science. English and arithmetic are also taught. After completion of their studies at the monastery, they will be sent to Namo Buddha Shree Mangal Dvip Branch School for further studies. 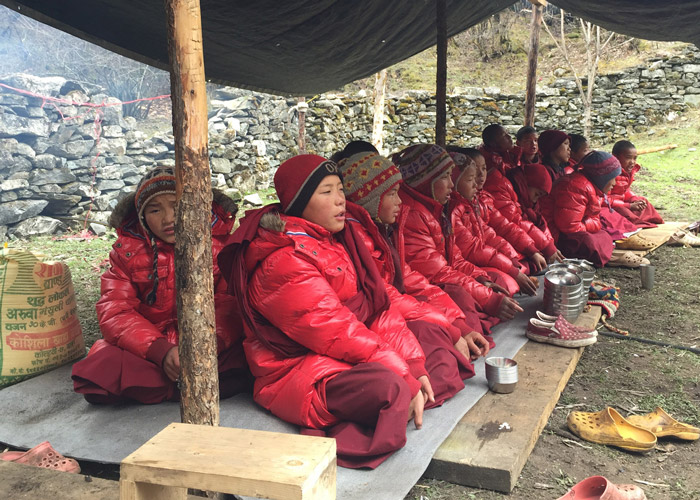 Annual Mani Puja at the Monastery

Every year, a Mani Puja is organized at the monastery. Monks from Thrangu Monastery in Kathmandu are invited to perfom puja. During mani puja, lay people from the nearby villages come to recite mani mantras. All the food and other commodities are provided by the monastery. At the end of the puja, Ven Tulku Damcho gives a teaching to the villagers.

The main aim of doing this Mani Puja is to encourage all villagers to practice Dharma continuously with more energy and enthusiasm.

About the Monks and Staff

Currently, there are twenty three young monks, a teacher, and a manager of the Monastery. Every two or three years, new staff monks from the main monastery are appointed to the Nubri monastery.

Most of the food is brought from the nearby market called Arugat. It takes 3 to 4 days each way to travel down to the market and return to the monastery. All the food is carried on mules. The porters may take 7 to 8 days to reach the monastery and they charge NRS.130-150 per kg.
There is now a health clinic and a school. When people get a serious sickness, it is very difficult for them to reach the main city quickly for a checkup. This health clinic is a great boon to the villagers.

Most of the people in the area engage in subsistence farming, working from morning to sunset in the fields. They want their small children to get a good education, but they cannot afford to send them away to school in the city. The monastery in Nubri gives children the chance to practice and learn Buddhism; they receive a modern education as well, and their parents can easily see their children any time. The monastery is striving to provide good facilities and educational opportunies for the people of the area.

Located in northwestern Nepal on the Tibet border, the district of Manang is inhabited by the people known as Nishangbas. It is thought that these people originally came from the U Tsang region of Tibet. The Tenth Karmapa, having a vision of the spiritual needs of Manang, sent his disciple Khedrup Wangyal Karma to establish monasteries there. Sher Gonpa is located in the area of Manang known as Braga. Nearby are the famous caves where the Yogi, Milarepa meditated for six years as well as caves of other great meditators. The Gonpa was established by Lama Dawa, who born into the family of the caretakers of Drakar Gonpa in the town of Manang. Lama Dawa’s son, Acho Lama is highly respected lama of Thrangu Monastery. As well, he is the spiritual director of Thrangu Rinpoche’s nunnery. His sister Ani Tsomo is the head of Tara Abbey and resident lama of a centre in Taiwan. Lama Dawa is now deceased. Since his death, through the efforts of Lama Acho, Ani Tsomo and community, Sher Gonpa has been rebuilt. The Gonpa is offered to Venerable Thrangu Rinpoche and now it is the Retreat Centre of nuns of Thrangu Tara Abbey.

Satek Monastery is located at Nar village in Manang district. This is a very remote region.

In the year 2003, Satek monastery was offered to the Lord of Refuge Thrangu Rinpoche Rinpoche has several purposes in mind for rebuilding the monastery. First, there is an important stupa called Satek which contains many very sacred relics and a temple nearby. These were built despite great difficulties and toil by the great meditator Khedrup Karma Lobsang and other great beings. Where it is undiminished, the tradition resulting from these great efforts should be expanded, and where it has weakened, it should be restored.

The monastery was inaugurated on 2013 A.D. There are many monks in the monastery who from different places. The monks study basic modern education, as well as Buddhist Sutra.

The Founding of the Monastery

When times changed in Tibet, Jangpa Jamyang Drakpa—a direct disciple of Tokden Shakya Shri’s foremost disciple Tripön Pema Chögyal Rinpoche and the guru of the Fifth Kyabje Sengdrak Rinpoche—went via Shar Gang to Shar Khumbu, where he stayed and performed dharma activity for a long time. Later, he went to Geshing Gang in Tatopani in the Sindhupalchok District on the northern border between Nepal and Tibet, a place near the hermitage Nyanang Dzong that had been blessed by Gyalwa Götsangpa and other early Kagyu masters. He came with his retinue this place surrounded by the natural beauty of mountains in 1974 and founded a monastery. He stayed their in retreat, while also occasionally giving empowerments, dharma teachings, and so forth to the local people. In the end, he passed to nirvana at that place, and Kyabje Sengdrak Rinpoche performed the funerary rites.

How this Monastery Became a Branch of Thrangu Monastery

On October 3, 1978, after the completion of the rainy season retreat, I traveled with Lama Sönam Chödar, Lama Dargye, and others to the hot springs in Tatopani. Lama Sangak came there and said that he was offering the Geshing Gang monastery to Thrangu Monastery, and asked me to accept it. I did, and later the monastery was renamed Thrangu Tashi Choephel Ling.

How the Monastery Has Been Overseen

I asked a monk from our monastery, Karma Jorden, to oversee the monastery and to help the faithful laypeople of that area. He established the tradition of teaching the children of the area Tibetan language and writing and the other preliminary topics. When they passed a test, they were sent to the main monastery of Thrangu Tashi Choling in Boudhanath to engage in their main studies. Since then, there has been a steady stream of young people taking monastic ordination and engaging in studies.

In 2003, Karma Jorden went into retreat, and Nyima Wangchuk, also known as Dzendhare, was appointed his replacement. He has continued to oversee the monastery to the present day.

Pujas at the Monastery

Each year during the seventh Nepali month, members of the sangha from our monastery travel to Tatopani to give the local people introductions to Buddhism and to read the Prajnaparamita in 100,000 Lines. In particular to benefit deceased beings, they perform the puja “An Ocean of Lamp Oil,” an Amitabha puja connected with a lamp offering prayer.

The Destruction of the Monastery in the Earthquake

On April 25, 2015, the old monastery was completely destroyed by the great earthquake.In order to be able to offer some service to Buddhism and to gather the accumulation of pure virtue, the monastery is being rebuilt. Lama Rigdzin and Gen Tenzin have been appointed to oversee the reconstruction, and I would like to ask the directors of our dharma centers abroad as well as the faithful sponsors to offer their prayers and support.

Written by the one called the Thrangu Tulku at Thrangu Tashi Yangtse Monastery in Namo Buddha, near one of the three great stupas of Nepal on Tuesday, the 10th day of the 11th month of the Earth Pig year of the seventeenth cycle, or January 5, 2020. May this be a cause for the teachings to remain long!

The Very Venerable Khenchen Thrangu Rinpoche established Lumbini Thrangu Monastery in 2010 when the land was granted by Lumbini Development Trust to establish a monastery representing Canada. It is located in the West Monastic Zone of the Sacred Garden in Lumbini, the birthplace of Gautama Buddha. It is also known as Canada monastery and is a branch of Thrangu Monastery Canada under the Vajra Vidhya Buddhist Association.

In 2014 the monastery was inaugurated by VV Khenchen Thrangu Rinpoche along with the Chief Guest, Minister Lal Babu Pandit.

In Lumbini there are many monasteries and temples that represent countries worldwide as well as the main temple known as the Maya Devi temple on the site of the Buddha’s birthplace.

From fall until spring each year about 40 young monks come from the high mountain areas to live and study in the monastery along with their monk teachers and volunteer teachers from Shree Mangal Dvip school.

The young monks study the Nepal Department of Education curriculum; learn basic Dharma teachings and some rituals as well as learning English, Nepal, and Tibetan languages.

There are also scholar nuns of Thrangu Tara Abbey and scholar monks in residence who are studying at Lumbini University in the Masters program in Buddhist Studies. Counting the monastery administrative staff there are around 60 monks and nuns in residence. 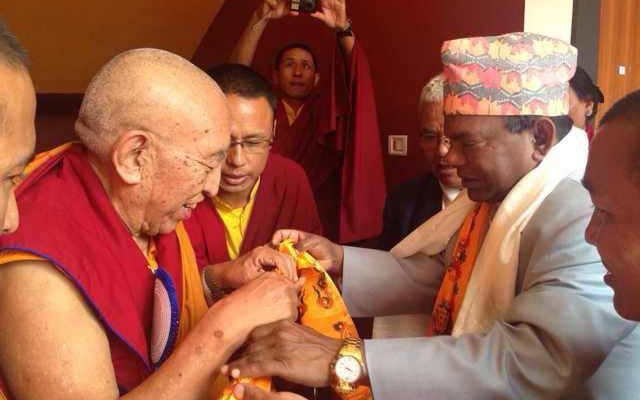