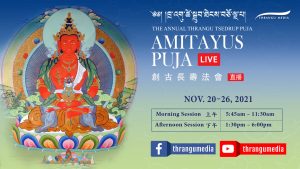 This special long life Puja is a tradition passed forward from Thrangu monastery in Tibet. As this long life puja carries great blessings, for the past several years Thrangu Tashi Yangtse monastery has performed this long life puja each year in order to preserve and uphold this precious tradition and for the long life of the V.V. Khenchen Thrangu Rinpoche. This puja is dedicated to the flourishing of the Dharma and world peace and to the wellbeing of all sentient beings.‘ The Annual Thrangu Tsedrup Puja’ (Prayer for Long Life and World Peace) to be performed from November 20th to 26th, 2021.

Text of “Tsedrub Thabshey Khajor” is a Terma discovered by Yongey Mingyur Dorjee. Yongey Mingyur Dorjee lived during the later part of the 10th Karmapa, the whole life of 11th Karmapa and the early life of the 12th Karmapa. The Termas that Yongey Mingyur Dorjee discovered are called the “Yongey Pod Soom” or The Three Canons of Yongey. The Three canons of Yongey are 1- Tsedrub Thabshey Khajor(Long Life Sadhana of the Union and Method), 2- Pema Vajra(Guru Yoga of Guru Rinpoche), 3- Guru Drolod(the wrathful practice of Guru Rinpoche). Despite these being special teachings by Guru Rinpoche, the monks of Thrangu Monastery perform the Tsedrub Thabshey Khajor according to the Karma Kagyu Tradition which was skillfully shown and has the blessings of HH the 12th Karmapa Jangchub Dorjee, HE the 8th Shamarpa Palchen Choki Dhondup and HE Situ Choki Jungney.

There was a major earthquake in Thrangu Monastery during the life of the 14th Karmapa. So the Rinpoches and monks from the monastery asked HH the Karmapa for assistance. HH the Karmapa said that if the monastery can be rebuilt than there is a huge possibility that the Dharma will be spread far and wide. He also said to invite the Great Terton Chogyur Lingpa.  The monks of the Thrangu Monastery followed the instructions of Karmapa and according to HH the Karmapa’s instructions, The Great Terton Chogyur Lingpa was invited and he performed the “Taming of the Land” after the monastery was rebuilt. Terton Chogyur Lingpa prophecied that the Monks of the Thrangu Monastey need to perform the elaborate way of “Tsedrub Thabshey Khajor”. The Great Terton Chogyur Lingpa also showed and taught the elaborate way of performing the Cham as implicated in the text itself which was: Make a right circle to the right three times, make a left circle to the left three times, dance by scattering three times, dance by gathering three times and so on.

In the pure realm of Boddhisattva with immeasurable life and wisdom, which is the Dewachen, The Lord Amitayus was sitting in the center and he was surrounded by Gyalpo Sangpo Chog (The Great Kind King), Yum Lhamo Shijichen (The consort Majestic Goddess), Sey Dawai Hod (The son Moonlight), Rimdropa Nyenpa Drima Medpa (The Principal attendant Pleasantly Stainless) and other Boddhisattvas. In front of all these Great Buddhas and Boddhisattvas, the Sixteen Goddess performed this majestic dance and was seen directly and clearly by the Great Terton Chogyur Lingpa. He taught this majestic dance to the monks of the monastery.

By performing this dance, in general it helps in the spreading of Dharma and in bringing peace and happiness to the whole world. In particular,  whoever sees this once a year, this dance has the special blessings of removing the obstacles of life for a year. This was of performing the Long Life Sadhana is widely known as the “Thrangu Tsedrub”.

After the Cultural Revolution in Tibet, the Dharma was badly destroyed and there were lots of disasters. The essence of the lands and countries were heavily corrupted. So the present Thrangu Rinpoche thought that to revive the Dharma and to bring peace in the world, it would be best if we could revive the tradition of “Thrangu Tsedrub”. Then in the year 2007, two senior Chanting Masters (Lama Dawa Phurpa and Nima Tashi) from Thrangu Monastery in Nepal were sent to the Thrangu Monastery in Tibet to learn about the special rituals of “Thrangu Tsedrub”.  During their month long stay they also learned the Tsedrub Cham and after perfecting all these they returned to Nepal. After getting back to Nepal, these two Chanting Masters taught the monks of Thrangu Monastery from Boudha, Namo Buddha and Varanasi and also to the nuns of Thrangu Monastery In Swambhu. In the month of November the same year, the Very Venerable Thrangu Rinpoche gave the empowerment of “Tsedrub Thabshey Khajor” to all the monks and nuns of Thrangu Monastery at the very holy site of Namo Buddha, the place where the present Buddha in one of his earlier lives offered his body to a hungry tigress and her cubs.

May 11, 2022 Under the guidance of our root guru the Very Venerable Khenchen Thrangu Rinpoche, Choje Lama Wangchuk Topden

Tulku Damcho and Choje Lama did the consecration and opening ceremony of the monks dormitory at our monastery in Nubri.